For over 30 years, King Orthodontics has helped children and adults achieve the confident smiles that they have been dreaming about. Dr. Earle King founded our Wexford location in the 1980’s and in 2017, with the addition of his son, Dr. Bryan King, the practice expanded to include a second location in Bridgeville.

At King Orthodontics, patient comfort is our number one priority. We know the lives of our patients and parents of our patients are busy. That is why we strive to provide an atmosphere that is calming and friendly, and an experience that is always positive. Our goal is that every patient feels like a part of our family.

Our team is a dynamic group of caring individuals dedicated to unsurpassed excellence in the orthodontic industry. We strive to provide highly personalized attention in a state-of-the-art environment.

Dr. Bryan King and Dr. Earle King are Board Certified in Orthodontics. In addition, Dr. Bryan has a Masters degree in Periodontics, meaning that he has experience using a dental laser to promote healing and improve the health of teeth and gums. To learn what it means to be a Board Certified Orthodontist visit the ABO website.

Dr. Bryan C. King was born and raised in Western Pennsylvania. A native of the North Hills, he attended both St. Alphonsus and Quigley Catholic High School. In 1999, Dr. King earned his DMD from The University of Pittsburgh School of Dental Medicine.

After dental school, Dr. Bryan, as his patients and staff call him, completed a General practice residency at St. Elizabeth Hospital in Youngstown, OH. Following a successful residency, he made the decision to pursue the field of Periondontics, and in 2003 he earned a Masters of Dental Science in Periodontics from The University of Pittsburgh School of Dental Medicine. Following his Periodontal Residency, Dr. Bryan chose to continue his education by accepting an Orthodontic residency at St Barnabas Hospital in The Bronx, New York. In July 2006, after completing his residency, Dr. Bryan chose to return to the area with his wife and begin working with his father at King Orthodontics.
As a practicing orthodontist, Dr. Bryan has been awarded many honors; including being named a Diplomate of the American Board or Orthodontics and being named a “Top Dentist” by Pittsburgh Magazine for several years running. In November 2008 he was selected by Invisalign to present a case at their annual summit. Dr. Bryan presented to nearly 1,000 of his peers from across the country and received high complements on both his case and his presenting. Perhaps the most significant honor was the Lifetime achievement award he was given by Align Technologies in 2014 for his work with Invisalign.

In 2014, Dr. Bryan also began instructing at Seton Hill University Center for Orthodontics. As an instructor he enjoys bringing his techniques and love of new technology to the residents he works with.

Dr. Bryan is proud to work alongside his father and looks forward to expanding the King Orthodontics family to the next generation and continuing the tradition of quality care that has become synonymous with King Orthodontics.

Dr. Bryan currently lives in Gibsonia with his wife Anita, their two sons Garrett and Declan, and their goldendoodle Trooper.

Dr. Earle A. King, a Board Certified Specialist in Orthodontics and a member of the American Association of Orthodontists, is committed to providing quality care to all King Orthodontics’ patients.

He believes in the importance of ongoing training so that he can continue to provide new technologies in orthodontics to his patients, improving their smile and their quality of life.

Dr. King is a member of many orthodontic societies and regularly offers his expertise to dentists in and around the Pittsburgh area on the treatment of complex cases. He has been an active community and church member during the last 30 years. He and his wife, Lorraine, have two sons: Bryan, who joined King Orthodontics in 2006 and Robert, a General Dentist who also practices in the Pittsburgh area.

Dr. King believes that his patients deserve a warm, comfortable and caring experience at King Orthodontics. He and his team love to help their patients gain confidence by making sure they get the wonderful, healthy smile that they deserve. 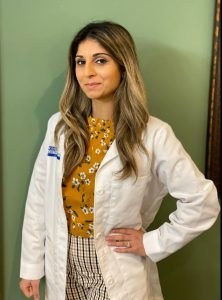 Dr. Monica Hummel grew up in Central Pennsylvania before moving to Pittsburgh after meeting her husband Michael, a Pittsburgh native. After completing a Master’s degree in Chemistry from Indiana University of Pennsylvania in Indiana, PA, she earned her DMD from Lake Erie College of Osteopathic Medicine School of Dental Medicine. During dental school, her passion for working with children led her into the field of orthodontics.

Dr. Hummel completed her Orthodontic residency at Seton Hill University in Greensburg, Pennsylvania, where she studied under Dr. Bryan. During her time there, she attained a Master of Science in Orthodontics and Certificate in Orthodontics and Dentofacial Orthopedics. She is a member of the American Association of Orthodontists.

Dr. Hummel prides herself on patient centered care, professionalism and being a life-long learner in her field.

Dr. Hummel lives in the Pittsburgh Metro area with her husband and their son.

Our Orthodontic Technicians are among the highest trained in the area. They are well versed in cutting edge technologies for both children and adults, including Invisalign® and Invisalign Teen®. 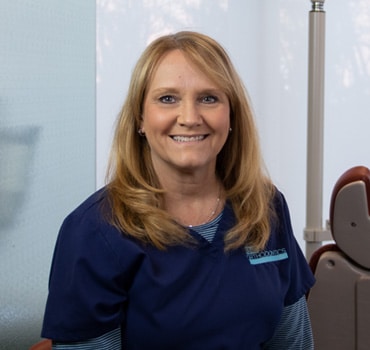 Denise joined King Orthodontics in 2000 as an orthodontic technician. Over the years she has developed a wealth of knowledge in the orthodontic field. As a long-standing member of the team, she also has insight into the day-to-day operations of the clinical department. That insight lead to her becoming the Clinical Coordinator of our practice in 2017. Denise takes great pride in keeping the clinicrunning smoothly and transforming the smiles of our patients from one generation to the next. When not working at the office, she enjoys spending time with Tim and their families. 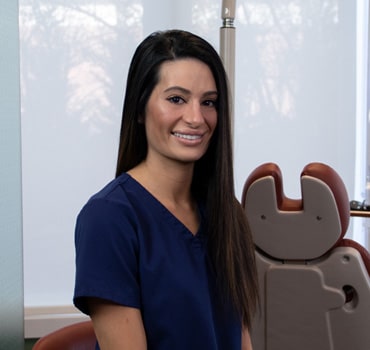 Pittsburgh native, Lauren, graduated from Bradford School as an Expanded Functions Dental Assistant. After working several years in general dentistry, she decided to make the change to the orthodontic specialty. Since joining our practice in 2015 as an Orthodontic Technician, Lauren has continued to share her exceptional clinical skills and energetic chairside demeanor with our patients.When not at work, Lauren enjoys spending time with her children and two chihuahua’s. 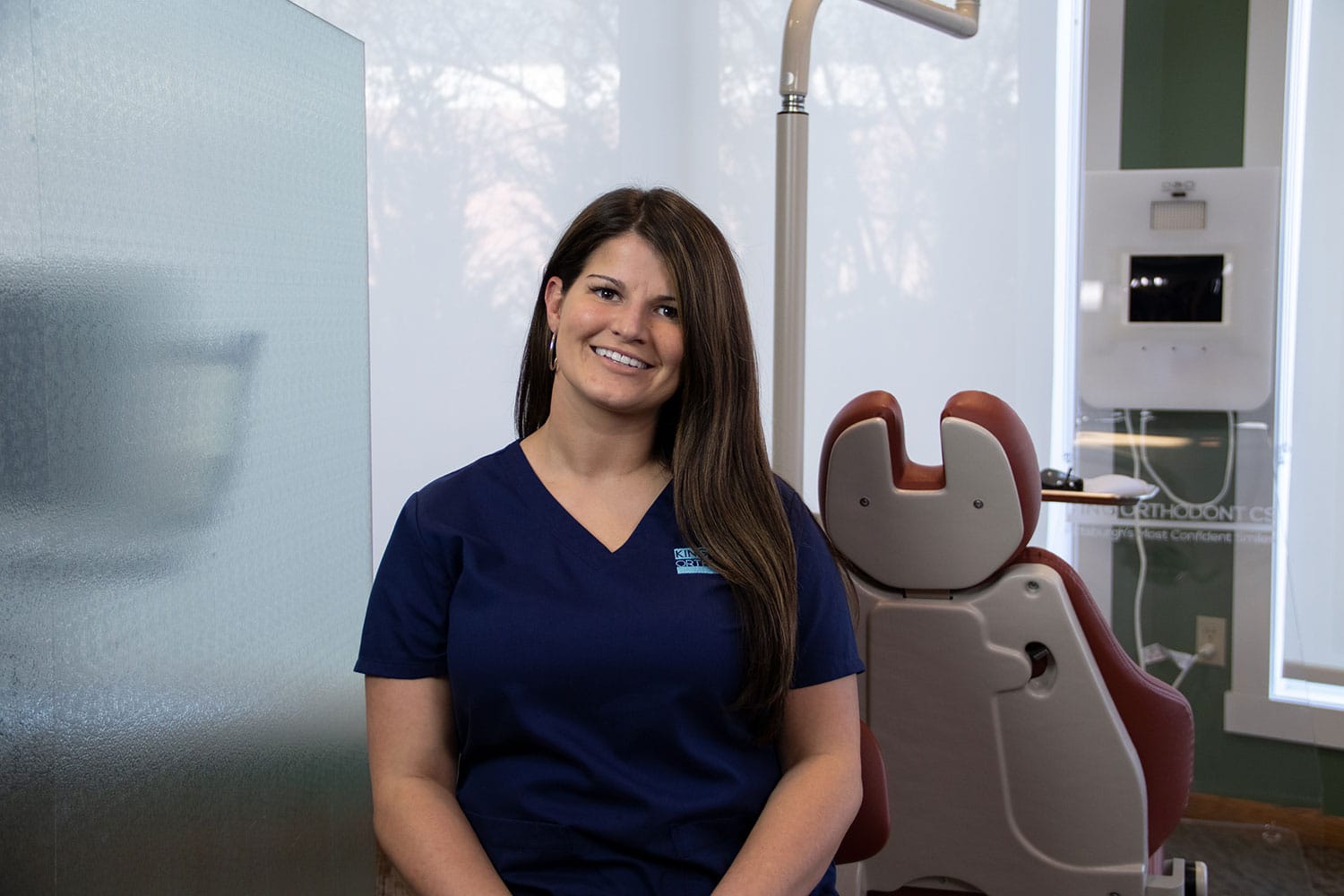 Nikky began her journey as part of the King Orthodontics team in 2020.  Before joining the team, she worked in the orthodontic field for two years and assisted in general dentistry for four.  She enjoys seeing the smile transformation and confidence that orthodontics give patients after completing treatment.  When she is out of the office, Nikky is probably playing soccer or on the water with her daughter! 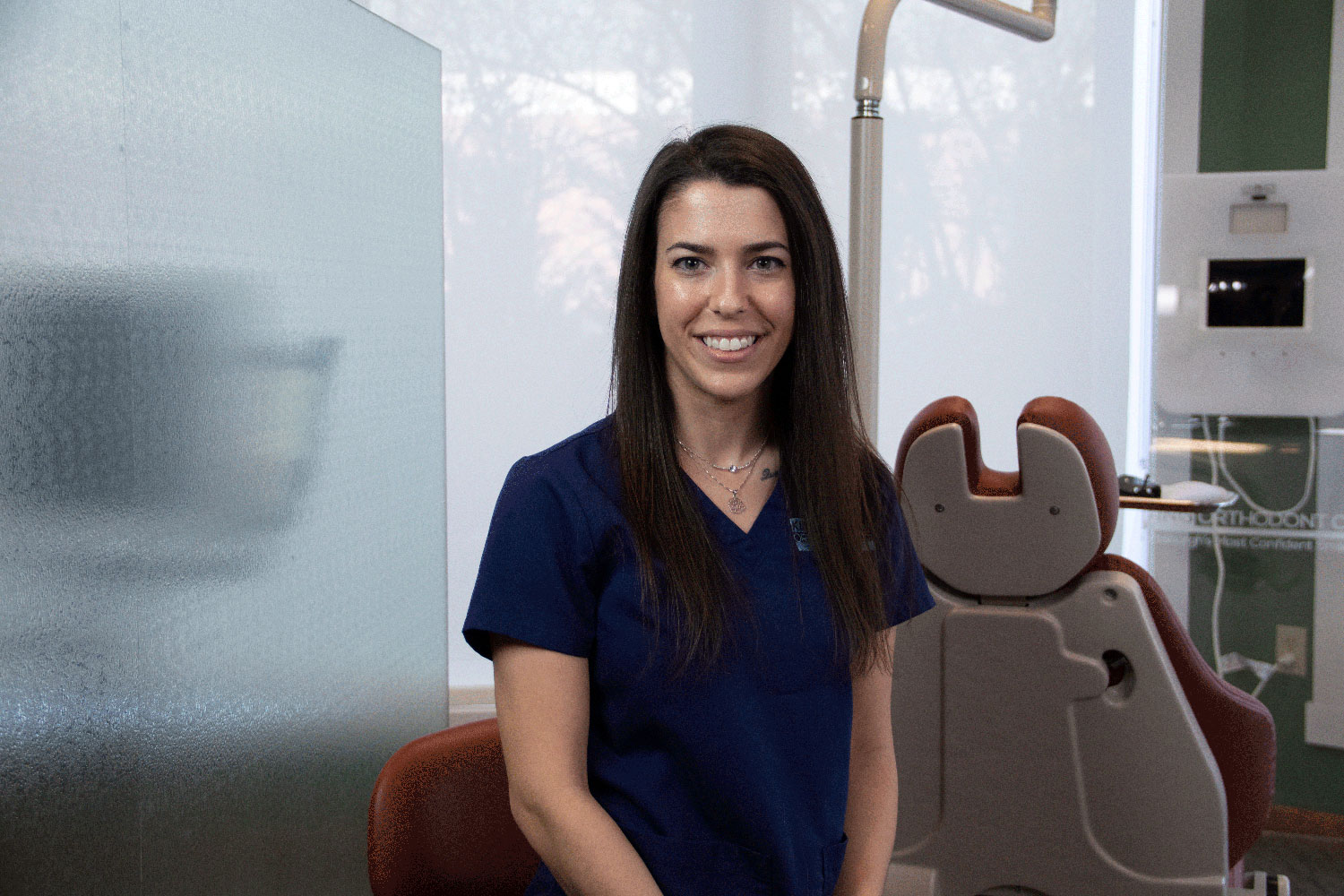 Born and raised in Pittsburgh, Amy joined King Orthodontics in early 2020.  Previously, Amy had a career in phlebotomy before making the switch to orthodontics in 2018.  Her favorite part about working in the orthodontic field is learning the science behind orthodontics.  In her free time, Amy enjoys doing home renovations with her husband and taking her dog, Yeti, to the park.

Our Administrative Team will welcome you like a member of the family – every time. They will also do their best to schedule appointments that work with you busy schedule. 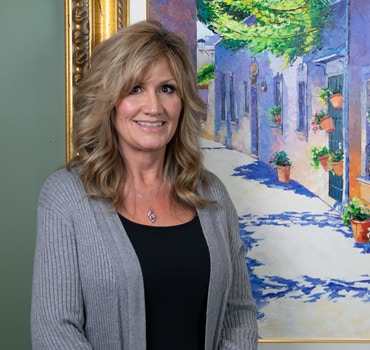 Traci joined the King Orthodontics team in April 2017. She came up to us with extensive experience from Allegheny Health Network. As Financial Coordinator, Traci enjoys working with our patients to help them determine the best option, financially, to obtain beautiful smiles. At home, Traci enjoys spending time with her three sons and beautiful granddaughter. 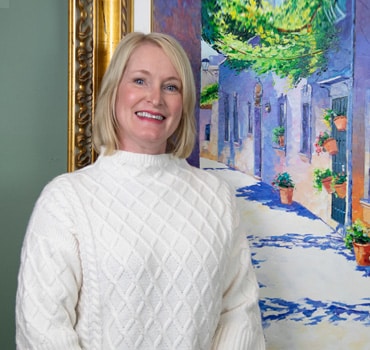 Before joining our practice in 2017, Gretchen, and her four children, were patients at King Orthodontics. As Treatment Coordinator at our Wexford location, she oversees the new patient experience. Her positive attitude and calm demeanor make her a welcome addition to our team. In her spare time, she enjoys practicing and teaching yoga, as well as, spending time with her family and friends. 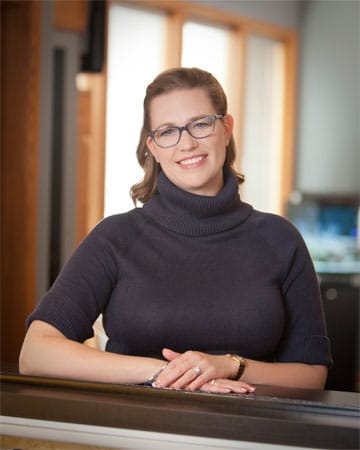 As Practice Director, Anita wears many hats. She not only oversees the day-to-day needs of both patients and our team, but also is continuously looking for new ways to reach potential patients. She brings a great amount of experience to the King Orthodontics team. Previously, she has worked in the marketing divisions at prestigious performing arts organizations including New York City Ballet, Pittsburgh Symphony and Pittsburgh Broadway Series. Anita also happens to be the wife of Dr. Bryan King and mother to their sons, Garrett & Declan. She is tremendously proud to be part of this family business.  When not in the office, Anita may be working from home, traveling, or volunteering at their sons’ school. 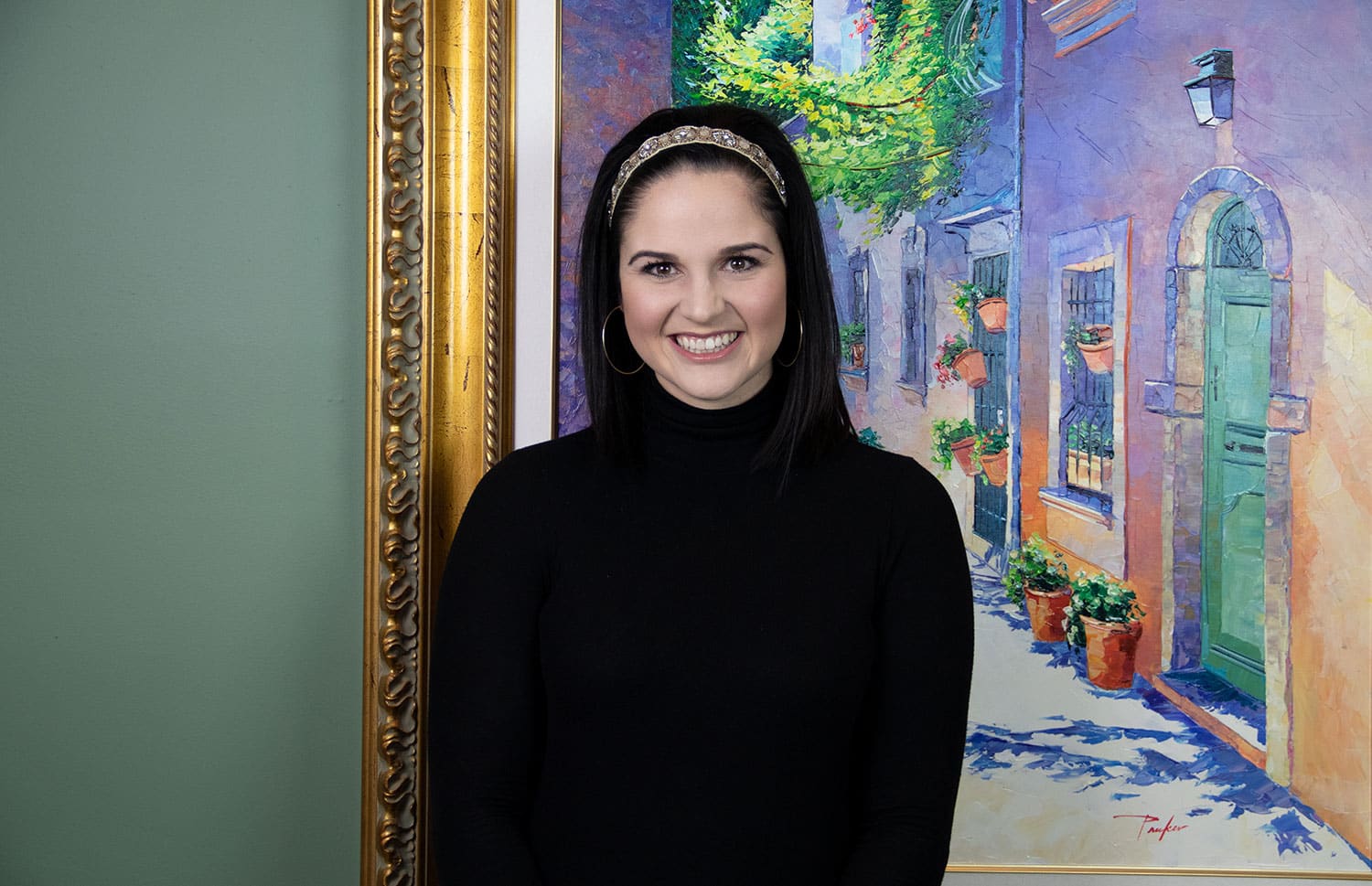 Kaylee has worked with the King Orthodontics team since May of 2016.  As Marketing/ Administrative Coordinator, she assists the Practice Director in coming up with marketing campaigns, as well as managing the social media platforms.  You may also talk to her on the phone or schedule your next visit with her!  In her free time, Kaylee enjoys traveling, reading, and running. 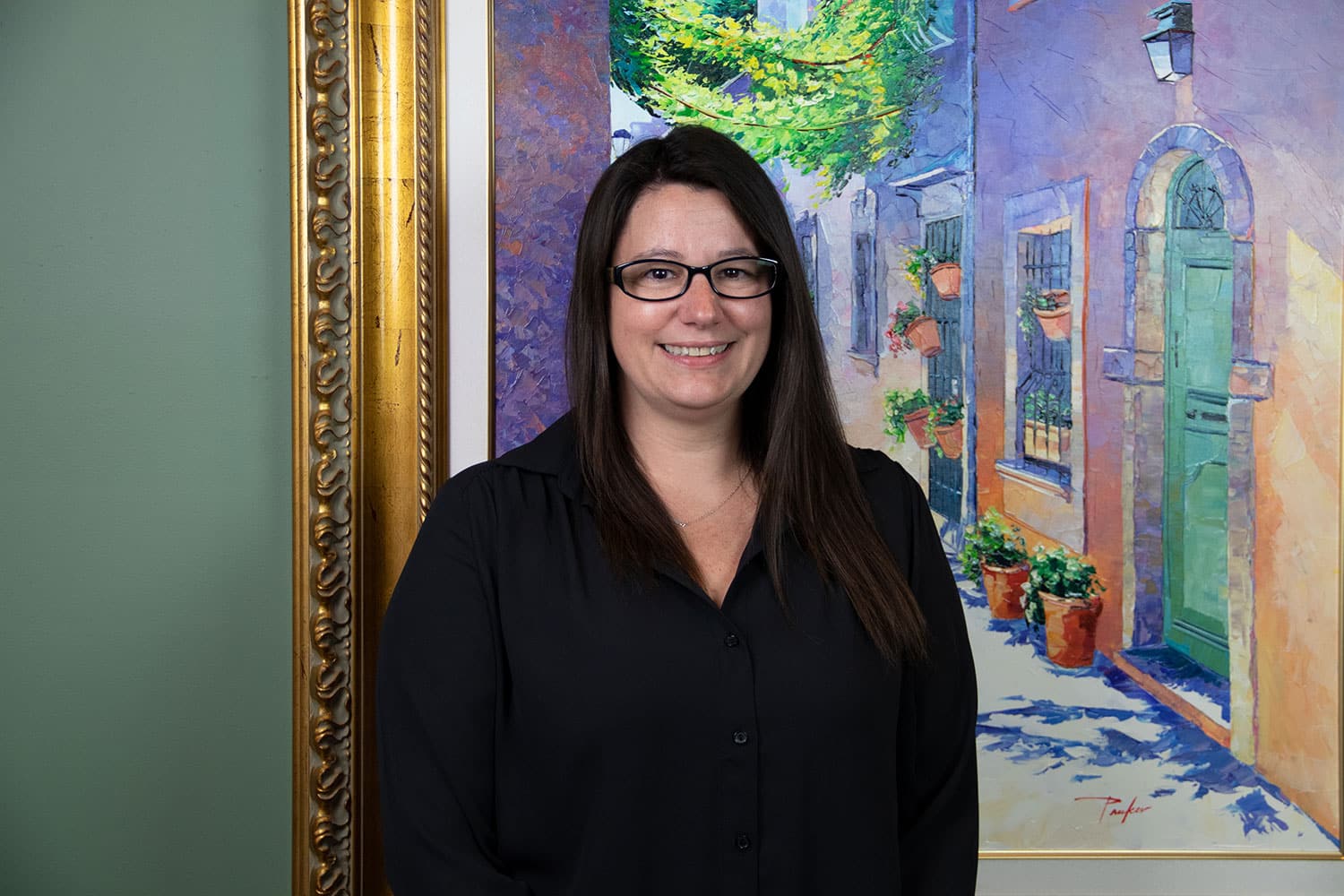 Rachel has been a member of the King Orthodontics team since 2019.  She is the first smiling face you see when you visit the Wexford office and can help with any of your scheduling needs.  Rachel lives in the area with her husband and two children, Sara & Regis.  In her free time, she enjoys spending time at her family’s camp in Kennerdell, PA.